One of our friends blogged about my sister’s wedding and it is what I would want to write so I’m just stealing her wonderful blog.

It’s a lot more interesting than my account of the wedding, which even after a month is still pretty much, “[happy sigh!] They’re so happy. [Sigh!]” (It’s all still just pure sappy emotion (no, I am NOT apologizing for it!) so there’s no proper grammar to be had.)

Here’s our friend’s MUCH better account of it, from her blog, “Chronical’s From The Dating Wars”. (We’re dying for pictures, still. Her wedding photographers are great, so we’re willing to wait.  (Sorry for the rhyme.) This photo is from my cousin Heather who made us all very happy by posting photos off her camera the next day. It’s my dad walking my sister down the aisle.) 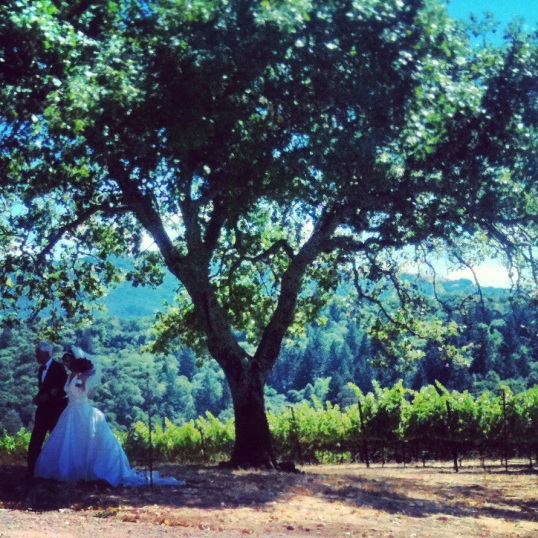 Okay, enough of me. On to the good blog:

Labels and the Perfect Wedding

I’m finally dating a man who calls me his girlfriend.

This is new territory for me.  I’m used to commitment-phobes.  I once dated a man who, after six months, referred to me as his “very, very, very very good friend.” I dated another who said that one couldn’t just call someone a girlfriend, or a boyfriend, that you had to come to some kind of consensus about it all, that it took time, and that we had only been seeing each other for a year.  And, I’ve had many bad dates that really went nowhere.  So putting a name on anything is a huge development for me.  And, here I am with a man who is secure enough and committed enough in our relationship to give me a label.  What a feeling!

A couple of weeks ago, we both attended one of the biggest labels of all- a wedding.

The weather was perfect.  Sunny, warm but not sweltering, breezy at first but the wind eventually died down.  The setting was spectacular;  shuttle buses picked us up at the parking lot of the winery, and transported us up to the top of this magical hill, where everything was set up:  a place for the service, lots of comfy chairs and couches with a bar nearby, tables for dinner, a dance floor with a DJ.  Even the bathrooms were perfect, at least on the women’s side, because inside was a huge case full of anything you might need- hairspray, bobby pins, safety pins, double tape, feminine protection, breath mints, Kleenex, hand creme, etc.  You name it, it was probably in there.   The view from the hilltop was amazing; 360 degrees of rolling hills and vineyards stretching away into the distance.

The ceremony was perfect.  Just long enough to be meaningful, but thankfully not a full-blown Catholic Mass,  which, when attached to a wedding can take several hours.  The bride was absolutely gorgeous, and when I saw the way she and the groom looked at each other I started to cry.

The whole day was perfect.  The service, the wedding dress, the bridesmaid’s gown, the wine, the food, the cake and gelato, the coffee.

The groom got up and made a speech about how peaceful and beautiful our surroundings were, and how his bride made him feel like that at the end of every day, no matter how crazy it had been and how much his head was spinning.  And if we should find a person like that, we should hang on to them.

When the groom made his speech, there was a collective sigh from the entire assemblage.  The women all sighed, because it was quite possibly the most romantic thing any of us had ever heard.  The men all sighed because now they all had to live up to impossible standards; the ante had been upped.
My boyfriend turned to me and held my hand.

As the twilight descended, lanterns came on, and a roaring fire was started in the fire pit.  Lots of dancing.  The party went on until long after dark.  It was the best wedding I’ve ever been to- in fact, it was perfect.

I saw the father of the bride yesterday.  He asked after my boyfriend, remarked that he seemed like a really nice guy, wanted to know his intentions, and was I planning to move in with him soon?

Don’t rush things, here.  I’m still getting used to calling him my boyfriend.

Liz again. See??? Thank you, Allyson, for saying what I wanted to say and then letting me steal your blog!

You can read more of her postings at her blog, http://www.chroniclesfromthedatingwars.blogspot.com/

3 responses to “My Sister’s Wedding–yes, the beloved “sisty ugler” in all my book forwards. ;)” 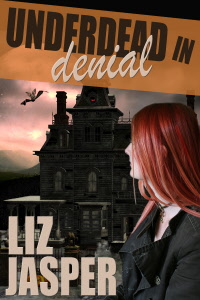